So here we are, half a year later and picking up Film Klub again. I haven’t stopped watching film in that time but a lot of time has been spent doing music and planning things for Soft Riot, as well as design work as JJD Works. To quote a Soft Riot song, “There Just Isn’t Enough Time”…

This is a short entry about two films that I’ve watch a number of years apart from one another: Dr. Caligari and Remote Control, both from around the same time period: 1989 and 1988 respectively.

I’ve grouped these two cult films together as they have some aesthetic and subjectual similarities. Both are very stylised underground 80s films that play a lot of colour and quirky plots but also take a bit of inspiration from novelty science fiction films of the 1940s and 1950s.

Dr. Caligari is a Canadian underground cult film that has no real relation to the German expressionist silent film, The Cabinet of Dr. Caligari. This 1989 film directed by Stephen Sayadian (Cafe Flesh, etc.) however carries over that expressionist feel from the 1920 German film with the moody, fantastic, angular sets and onimous music. However, Dr. Caligari is very much jacked in to the underground films of the 1980s that came off the back of inspiration from punk, new wave and avant garde performance. Perhaps there’s a bit of Rocky Horror Picture Show in there as well: playing around with proto-punk performance and gender roles…

The film concerns a doctor in a mental institution, Dr. Caligari, who looks like she spends a lot of time at underground clubs in addition subjecting patients to strange psychiatric experiments, including brain transfers done by way of injecting brain fluid from one patient into the head of the other patient. The stilled, cut-up dialogue of the film may seem there’s inspiration from Burroughs, as well as some very strange visuals including dolls with Japanese ceramic masks wielding razorblades as well as giant tongues licking people in a suggestive manner through walls, etc. The colour palette in this film is interesting: quite dark and murky with crazy splashes of bright pink, yellow and green.

The main plot starts to materialise around two doctors (Mr. and Mrs. Lodger) of Caligari’s lab, who start to become concerned about her methods and experiments. They then approach their father, Dr. Avol (played by Fox Harris, an American actor in a number of cult films, including Repo Man), who confronts Caligari only to fall victim to her mindswapping and receives an injection of Mrs. Van Houten’s fluid, turning him into a transvestite nymphomaniac.

There is a vibe in this film, as well as Remote Control, that feels like the vibe and atmosphere in Liquid Sky: stilted, angular, stylised and one of a sort of robotic, neurotic sexuality.

Remote Control carries a lot of elements similar to Dr. Caligari: mainly in the fashion sense, music and camp retro/weirdo sci-fi elements but in a more straight-forward fashion as far as the plot is concerned. This film is directed by Jeff Lieberman who did the 1978 cult horror movie Blue Sunshine (perhaps what the Robert Smith/Stephen Severin side-project is named after?). Again, when watching there’s a similar vibe to Liquid Sky in some instances, including the soundtrack which features those early Fairlight-style sampling sounds.

The plot of this film revolves around a new sci-fi film that is available to rent on the market called, well, Remote Control. At first this rental seems like a very camp and satirical tongue-in-check 50s/60s style alien film but soon after people view it it takes control of their minds and drives them to kill whomever they see. The film, when is duplicated and distributed on video cassette, is duplicated at a factory that the film’s rag-tag bunch of teenage heroes soon uncover. They find out it’s a plot by aliens to take over the world (but of course…).

There’s some rather novel fashion choices in this film, as well as a very entertaining club scene (see the clip) that contains some very strange but fun dancing.

Both of these films come across as very novel and comical but underneath the camp weirdness there is a sinister undertone. I guess it plays into my sense of humour: a bit goody, surreal, but with a strange darkness underneath.

There’s no big name stars in this film but featured an early role by Jennifer Tilly (Bound).

Also worth checking out is the cult film Forbidden Zone, which is a very similar vibe to these two films. 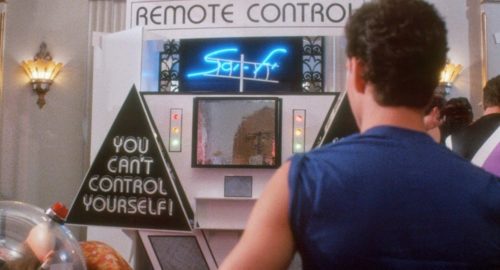